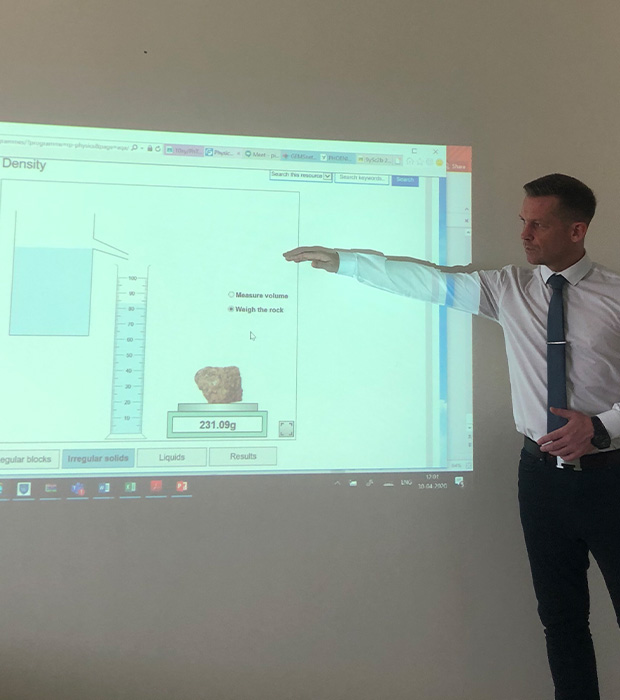 When it was announced that WIS was moving to a Remote Learning period and that schools were to be closed for the remainder of the academic year, new academic challenges arose. How could I provide the same outstanding experience students are exposed to in the classroom environment? Planning became the key aspect to ensure outstanding provision during remote learning. It was very difficult to ensure and encourage engagement in the early stages, but both myself and the students adapted quickly to ensure progress during all lessons was taking place. By using a digital projector and delivering live lessons ensured that the visuals were replicated during lessons plus the students still had myself present to explain key Scientific concepts using animations and diagrams to facilitate learning. A key priority for myself was to ensure that students were able to experience the practical elements of the subject, which is imperative for students to gain the necessary skills in Science and is an important aspect at both Key Stage 3 and the GCSE syllabus.

Using software I was able to demonstrate the practical elements of the course and direct students to collect data, process the data, and fundamentally evaluate and conclude on experiments, which could only be done within a Scientific laboratory environment. There have been a number of positive aspects to have emerged from this experience. Students have taken control of their own learning by becoming independent learners, a lot of students have become more inquisitive during lessons by asking probing questions and are quick to highlight their own misconceptions and misunderstandings. Differentiation has taken a different direction. Using the google platform students are allowed to move freely in between breakout rooms and push themselves further to complete challenges they wouldn’t usually encounter. The skills students have acquired during this period have been accelerated due to the situation we have all been put into, which has allowed me to reflect and redefine my teaching philosophy.